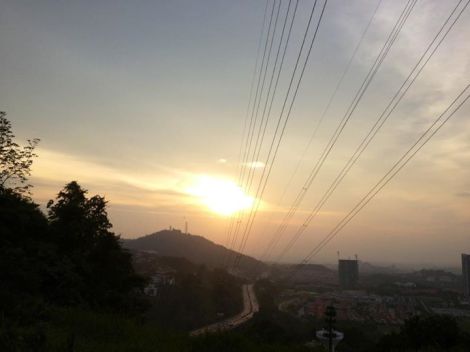 Sunset in the City – The North-South Highway/Motorway infrastructure allowing easy access travelling from the north to south of the Peninsular and vice versa.

ANTI-FOREIGNER sentiment has been simmering in Singapore amid complaints that expatriates have contributed to the rise in property prices in the island republic. But proponents of Malaysia My Second Home (MM2H) say the programme has had limited negative impact here.

MM2H was launched as the Silver Hair programme back in 1996 and was rebranded in 2002. As at August this year, it had attracted 19,488 participants. The programme, which comes under the purview of the Ministry of Tourism, is aimed at drawing expatriates and foreign funds to the country. It offers eligible expatriates a renewable 10-year social visit visa with multiple entries.

To qualify, participants must fork out at least RM150,000 (RM300,000 for those below 50 years of age), which will be kept as a fixed deposit at any banking institution in Malaysia. They may apply to withdraw up to 60% (or 80% for those below 50) of the fixed deposit after one year for housing, children’s education and medical expenses. Among the sweeteners for MM2H participants is a tax exemption on car purchases. Upon approval, one can either buy a locally as assembled vehicle or bring one from abroad duty-free.

With an increasing number of people choosing to retire in Southeast Asia, mainly because of the lower cost of living — the number of applicants for the MM2H programme had more than doubled from 818 in 2002 to 2,387 last year — some fear that Malaysia may be giving away too much for too little in return. In Singapore, for example, the rise in property prices has been pinned on the influx of foreigners, who have crowded out the locals from the market. However, the negative impact of MM2H is limited. We have only about 20,000 expatriates; the number is still quite small. Foreign buying has had little effect on property prices here. The number of foreign buyers of Malaysian properties is very small. Foreign investors accounted for less than 2% of total property transactions last year and about 5% in Kuala Lumpur.

In Singapore, there has been some disquiet over the influx of foreigners as the city-state welcomes them as workers and investors to develop its economy, given the country’s small population and low birth rate. About 36% of its population is now estimated to be foreigners, who have been blamed for a slew of problems, from rocketing property prices to fewer job opportunities for Singaporeans.

In Malaysia, participants of the MM2H programme were previously not allowed t to work, but the rules were later relaxed to allow those aged 50 and above with specialised skills and expertise required by critical sectors of the economy to work a maximum of 20 hours a week, subject to the approval of the MM2H Special Committee. Hence, the potential to tap the talent of this pool of expatriates is small.

Also, the MM2H programme appears to be more popular with Asians, with the Chinese topping the list of successful applications in the last 10 years, followed by the Bangladeshis and Japanese. The English came in fourth. Mild weather, lower cost of living, cheaper housing and English and Chinese being widely spoken here are some of factors that attract them to Malaysia, says Chong. “Some Chinese MM2H participants see Malaysia as a stepping stone for their children’s future education abroad.”

Bangladeshis are said to be attracted to Malaysia as there are political tensions in their country. “The rich in Bangladesh worry about the instability in their own country. They like Malaysia,” Lim says. However, some feel that the government should assess and improve the 10-year-old MM2H programme. Jack Moerschbaecher, 66, an American who has been living in Perak with his wife under the programme for about three years, says there should be more clarity on the rules and regulations.

“When I wanted to sell my vehicle, I was unable to find a description of the process. It would be great if there was a definitive source, like an accumulated index of information on the MM2H.” Things like this would certainly help other participants as their numbers rise.

"Mobilising Your Migration To Malaysia, Looking After All Your Needs"©

Thank you for dropping by our site!

We are licensed and endorsed by the Ministry of Tourism, Malaysia in providing migration services to applicants for the Malaysia My Second Home Programme (MM2H). We provide a full range of services in respect of the application to the Malaysian government for the MM2H Visa.

Please take a browse at our pages where we have elaborated on information we thought would be useful to you and which you should know about the MM2H Program and how you could be a part of this wonderful program.

We certainly look forward to hearing from you. Let us welcome you to Malaysia where you can delight in the charms and enjoyment of living in Malaysia.

The information we provide on this site and its content are our opinion and for informational purposes only. None of the information provided herein should be relied on as a full substitute for a proper consultation with our MM2H consultants in providing you a personalised service. We do not make any express or implied warranties, representations or endorsements from your use of this Site. All intellectual property rights in this Site and its content, including but not limited to the information and designs are the exclusive properties of Tropical Paradise (MM2H) Sdn Bhd.